The unique Riegersburg is located 482 metres up on a volcanic cliff in the hilly landscape of eastern Styria, and is considered a Styrian landmark. It looks back on a long history and was Styria’s rampart against the east for centuries. The most famous owner was Elisabeth, Baroness of Galler, who had the castle extensively restored, but was disrespectfully called “schlimme Liesl” by the people because of the many lawsuits she pursued.

A rather inglorious role was played by the Riegersburg during the times of the witch hunts in the 17th century. Katharina Paldauf, the wife of the castle administrator, became the most prominent victim of the obsessive belief in witches as a “flower witch” and was burned at the stake in 1675 in Feldbach.
Today the Riegersburg belongs to the Liechtenstein family and is a popular destination. A beautiful trail with numerous lookout points leads to the castle, as well as a panorama lift.

There is a permanent exhibition in the castle with regular tours, and special exhibitions are also held.
The castle has a well-known raptor centre as well, with regular demonstrations.

From the beginning of November to mid-March, the castle is closed for the winter! 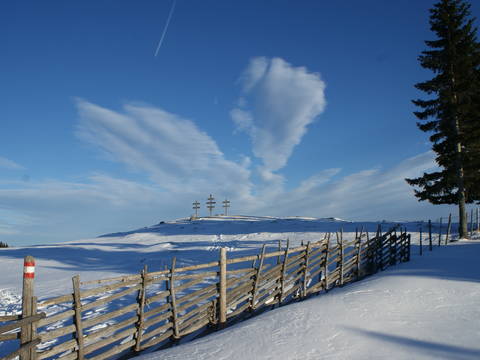 What a country the Almenland Nature Park! Take a look to our webcams, which provide up-to-date images of the most beautiful places.

Spend your free time in the fresh air in the snow-covered Teichalm and Sommeralm area. Skiing, cross-country skiing, tobogganing, winter hiking and much more awaits you!

By continuing to browse the site, you are agreeing to our use of cookies for analytics, personalized services and advertising.